Where Calgary’s Mount Royal & Lower Mount Royal neighbourhoods meet some weird things happen all at once. You hit a hill after the plains that makes up most of the Beltline and Downtown. A growing community of renters meet one of Calgary’s ritziest boroughs. And something absolutely bonkers happens to 8th St. and Royal Ave SW.

Two one-lane-each-direction streets come together to form an intersection that is more than massive. Let’s dive into what’s up with this intersection and how it could be made significantly safer for all road users. Here are a selection of photos taken showing the intersection 5 hours after a snowfall. Yellow indicates curbs and the edge of the untouched snow. 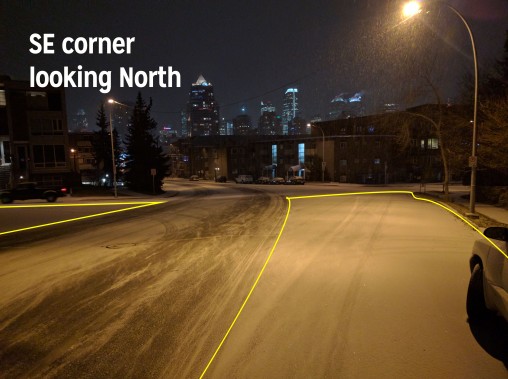 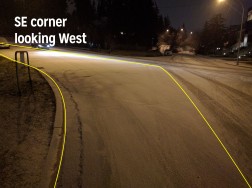 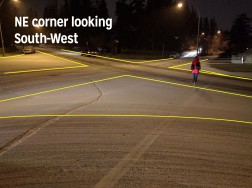 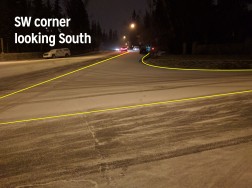 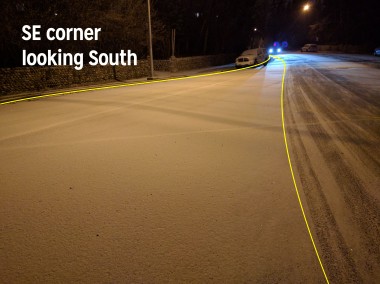 When I first encountered this intersection I felt like I was merging onto a highway as I rolled down the hill. This intersection of local streets has had 2 minor injuries involving pedestrians over a 16 years period.  This makes it the second most dangerous local street intersection in Mount Royal. We only get a small piece of the story from injury stats though.

When the city last did a traffic count at the intersection, seniors, children, and teens only accounted for 5% of pedestrian traffic. It’s clear that folks concerned for the safety of their children or themselves are avoiding this intersection. Pedestrians can only cross on three sides of the intersection highlighting that traffic engineers felt it too dangerous aswell to allow for  pedestrians to cross on the south side where the intersection is widest at 33 meters (My Word!).

Here you can see all directions you can travel within the current intersection. On three of the four corners, the turn radius provides for what is commonly referred to as a slip lane. Slip lanes results in faster turns for vehicles and add danger for pedestrians to cross. Slip lanes are typically employed in high volume arterial roadways and highways to provide for higher vehicular flow. This is done at the expense of pedestrian safety. This intersection is on the edge of a neighbourhood where 24% of residents walk to work.

The city’s most recent traffic count has 8th St. here moving 3300 vehicles during peak hours. A two lane road with left turn lanes, as this intersecton has on three of the four corners, has a capacity of 16 000 vehicles a day. This intersection is built to move 5 times more traffic than current volumes. The current design is overkill.

Looking more specifically at the turn lanes there is potential that these are justified even if the road is significantly under capacity.  If there are a huge number of turns made maybe the slip lanes are necessary. While the tracks in the snow show little use of all but one of the slip lanes I went looking for numbers.

Currently when looking at the number of drivers who actually use these slip lanes the number is 610 for all corners tallied up. Only 7% of vehicles that approach the intersection use the huge amount of space that is currently dedicated to turns that hug the edge of the intersection.

It’s worth looking further into turns hugging the NE corner because there are quite a few vehicles making that turn. I decided to remove it in the final design because because the city has plans sitting on a shelf from 15
years ago to do just that.

Interestingly enough, in the City of Calgary’s design they only decide to retain the SW slip lane that gets the least use out of all of the turns that hug the curb with only 20 cars during peak hours.

Here you can see how the vehicles will move through the intersection. It’s siginificantly more orderly than before. There would still be a stop sign for west – east traffic on Royal Ave. Away from the intersection, the extra lane on both streets is used for on-street parking. At the intersection, it’s wasted space.

You can just make out the 8th street parkette on the NW corner, but it’s no simmering jewel. This parkette was a part of the neighbourhood’s open space plan in the Area Redevelopment Plan. Back when the plan was created the land allocated for this park was roughly double the space that is currently there. A road alignment project for 8th street cut half of that park space and turned it into asphalt. With this redesign, while the benefits from huge safety improvements for all users and virtually no impact on traffic flow are frankly incredible  also reclaim 7000 square feet of park space simply by taking back the slip lanes on the NE, SW, SE corners.

What that open space becomes is a pretty big opportunity and it should get people excited about the safety and space gains you make by right sizing our intersections. Better design delivers better outcomes.